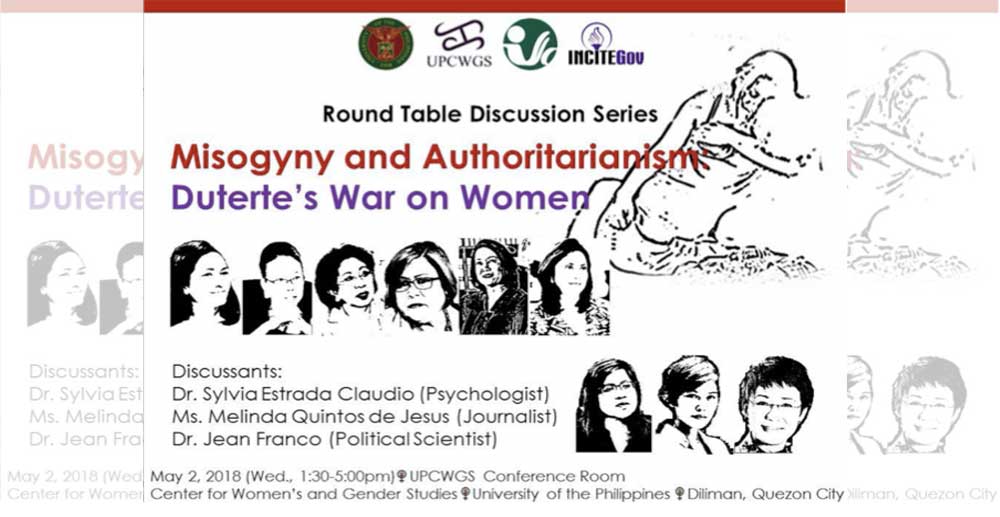 May 2, Quezon City - Are misogyny and authoritarianism connected realities, like two sides of a coin? Why are they happening despite the notable advances made by women’s movements in the country? What do we need to understand about our society’s values and culture, and how is populism related to them?

Dr. Sylvia Estrada Claudio, CSWCD Dean presented the different definition and views of scholars on misogyny and authoritarianism in the concept of psychology.

Professor Jean Franco Encinas, College of Social Sciences and Philosophy expounded the discussion on misogyny and authoritarianism from the perspective of political science, particularly the relationship between gender and politics under the Duterte Administration.

The roundtable discussion were attended by around forty women leaders from the civil society, academe, and media including Dr. Mary Racelis of the Institute of Popular Culture, Ms. Shamah Bulangis of Youth Resist, Dr. Carmela Abao of the Ateneo Political Science Department, and Ms. Joven Lauren, a blogger famous for her opposition against the Duterte Administration.

Teresita Quintos Deles, Chair of INCITEGov, noted in closing that the insightful exchange on the specific causes, nature, and effect of misogyny in the country had hopefully brought the participants to a place of shared understanding and a resolve to do something about the situation.

The organizers will work on the proceedings of the roundtable discussion so that everyone can review the discussions that transpired and be able to identify specific next steps in effectively pushing back misogyny and authoritarianism in the country.