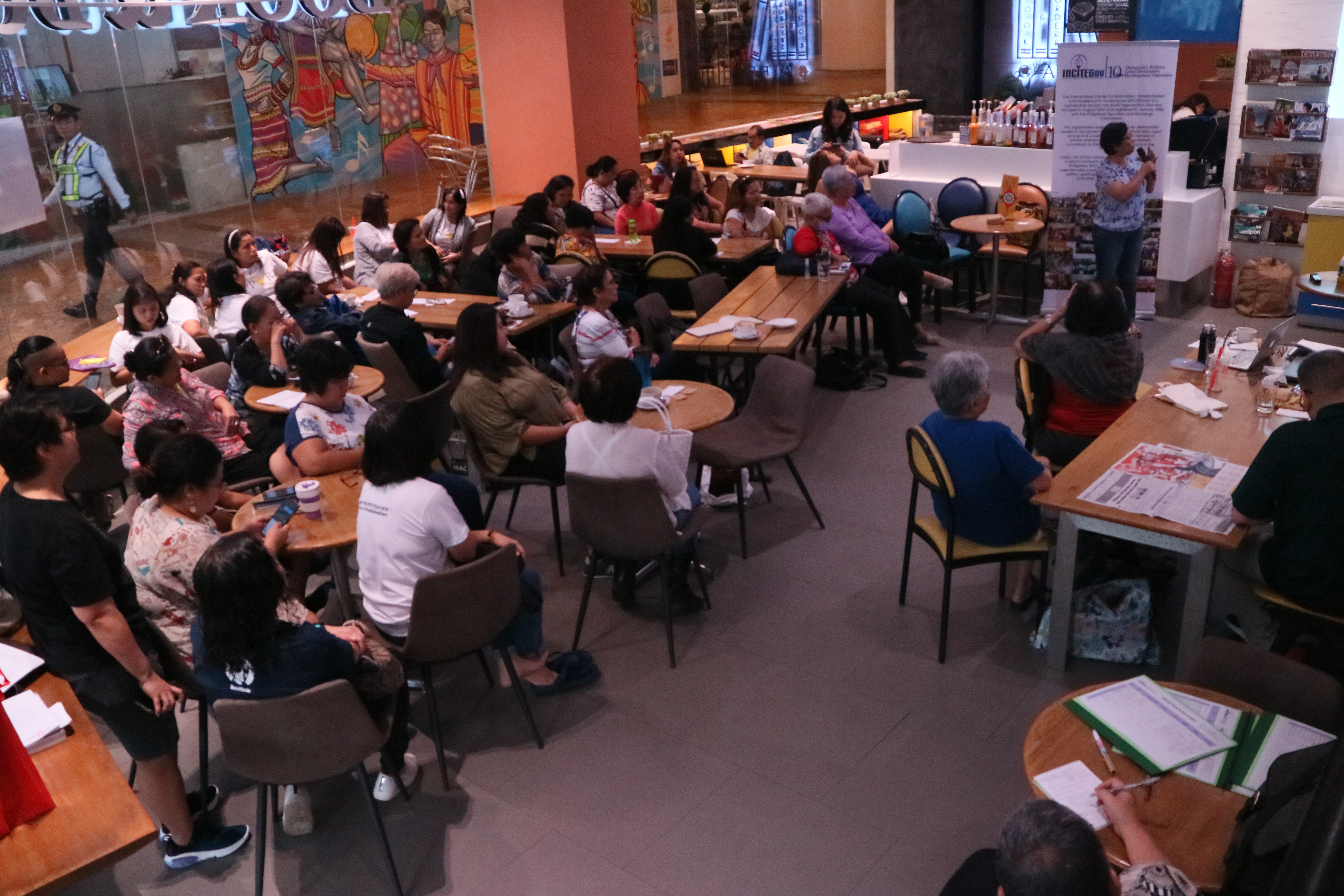 Paningin at Pagtingin: Advocates push for monitoring and gender sensitivity in the media

Nearly 25 years since the adoption of the Beijing Declaration and Platform for Action (BPfA), advocates note that there is still a need to address the negative media portrayal of women in the country.

In January 25’s Kwentong Kabaro, women’s rights advocates Olive Tripon and Lisa Garcia pointed out that the television content and programming in the Philippines still show the same stereotypes in its storylines and continue to portray women as either victims or villains.

Those in attendance also noted that these features are also present in radio programs and movies.

To respond to this, Tripon and Garcia posed that improvements should be made on both sides: on the audiences and how they consume information (paningin), and on traditional and digital media and how they produce their content (pagtingin).

According to Tripon, “paningin” includes media monitoring and examining how the news organizations report information and ensure balanced content. In turn, this exercise requires the audience to be critical of the content that they consume.

“The critical audience should give feedback on what they don’t want their children to see,” Tripon said. Olive Tripon, former executive director of the Women’s Feature Service (WFS), emphasized the need for the public to be critical of the content that they consume.

“Whenever we see stereotype portrayals, I think we can call out the television stations. You can write to them,” Garcia added.

Moreover, she also urged the public to be wary of sharing false information and fake news, especially in the age of social media. “We have to call out fake news and revisionism,” Garcia, who is also the executive director of the Foundation for Media Alternatives (FMA), said.

Citing the 2019 Global Digital Report released by We Are Social and Hootsuite, Garcia shared that there are more female Facebook users than males, most of whom are aged 18 to 34 years old.

She then suggested that these platforms could also be maximized for the development of women.

“Access to the internet though does not readily translate into women’s participation and access to rights. While women have equitable access, they do not use it for political participation; rather, the internet is used mostly to connect with family and friends,” she explained.

On the other hand, “pagtingin” involves conducting gender sensitivity training for teachers, advertising agencies, and media practitioners, including scriptwriters.

“Once they get themselves acquainted with different policies such as the BPfA, then hopefully they will acquire a new perspective of looking at women,” Tripon explained.

For its part, the government has enacted laws that aim to protect women such as Republic Act 11313 or the Safe Spaces Act of 2019. They also launched the Gender-Fair Media Guidebook which, according to the Philippine Commission on Women (PCW), seeks to eliminate gender stereotyping and promotes gender balance in the participation and representation of women and men across various forms of media and communication. The PCW also launched the GADtimpala for Media in 2015 in order to recognize the best practices in gender-fair media.

The BPfA argues that the lack of gender sensitivity in the media is evidenced by the failure to eliminate the gender-based stereotyping that can be found in public and private local, national and international media organizations.

The BPfA is considered a global landmark for the women’s movement. It aims to advance women’s rights and empowerment by focusing on 12 main areas of concern, including the stereotyping of women and inequality in women’s access to and participation in all communication systems, especially the media. (See also The long, winding, bumpy road: Beijing on my mind)

Adopted in 1995, the document’s framework noted how global communication networks were used “to spread stereotyped and demeaning images of women for narrow commercial and consumerist purposes.”

“Until women participate equally in both the technical and decision-making areas of communications and the mass media, including the arts, they will continue to be misrepresented and awareness of the reality of women’s lives will continue to be lacking,” it explained. The BPfA also gave cognizance to the media’s great potential to promote the advancement of women and the equality of women and men by portraying them in a non stereotyped, diverse and balanced manner.

The document outlines the following strategic objectives on women and the media:

One positive development, according to Tripon, is that many of today’s media organizations have female practitioners who have taken their role as producers, reporters, news anchors, or columnists. Other organizations are also women-led.

Still, the media have witnessed -- and some of them even became targets themselves -- of the current administration’s attacks against political and public figures through fake news, sexist jokes, and hate speech.

“Women media practitioners fear that if the administration can target high-level officials, what more the ordinary writers?” Tripon said. Garcia added that the harassment and intimidation experienced by female journalists who receive rape and death threats also have a chilling effect on them and their reportage. Lisa Garcia, executive director of the Foundation for Media Alternatives (FMA), provided a quick background on the social media use of women and cited online campaigns that aim to advance women’s rights.

Meanwhile, the civil society has also launched their own programs to further improve the status of women in the country, Garcia said.

For instance, there is “Take Back the Tech”, a global campaign that uses technology and monitors online gender-based violence against women, as well as the “Feminist Principles of the Internet,” a set of statements that offer a gender and sexual rights lens on critical internet-related rights.

There were also the so-called “hashtag movements” such as #MeToo, #BabaeAko, and Bantay Bastos.

“There are a lot of instances when violence against women occur in online spaces. Oftentimes, however, these only get ignored because some argue that the pain inflicted online is only emotional and not physical. ‘Mawawala rin ‘yan (It will fade eventually)’, Garcia explained.

The session’s attendees also made the following recommendations:

A new format for the Kwentong Kabaro conversations was also introduced during this session. The modifications were based on the assessment and inputs raised by the participants in a wrap-up session held in December 2019.

Starting January 2020, each monthly Kwentong Kabaro will aim to examine how major institutions such as the media, family, Church, and the government, affect the way women look at themselves and the world, and vice versa. Moreover, each session will also start with a quick recap of the national events that took place in the past month.

“Dahil patindi ng patindi ang mga challenges sa democracy at kababaihan, naisip namin na maging mas purposive at mas may direksyon yung mga pag-uusap (Because the challenges to democracy and women are getting stronger, we thought that each conversation should be more purposive and be aimed at a more precise direction),” INCITEGov chair Teresita Quintos- Deles said while emphasizing the need to create an agenda that will deepen everyone’s understanding of the current political landscape.

She also mentioned that each conversation will strive to reach a wider audience by going to communities. “Ang gusto natin talaga ay mapalawak ito (We want to widen the reach of each conversation),” Deles said. #