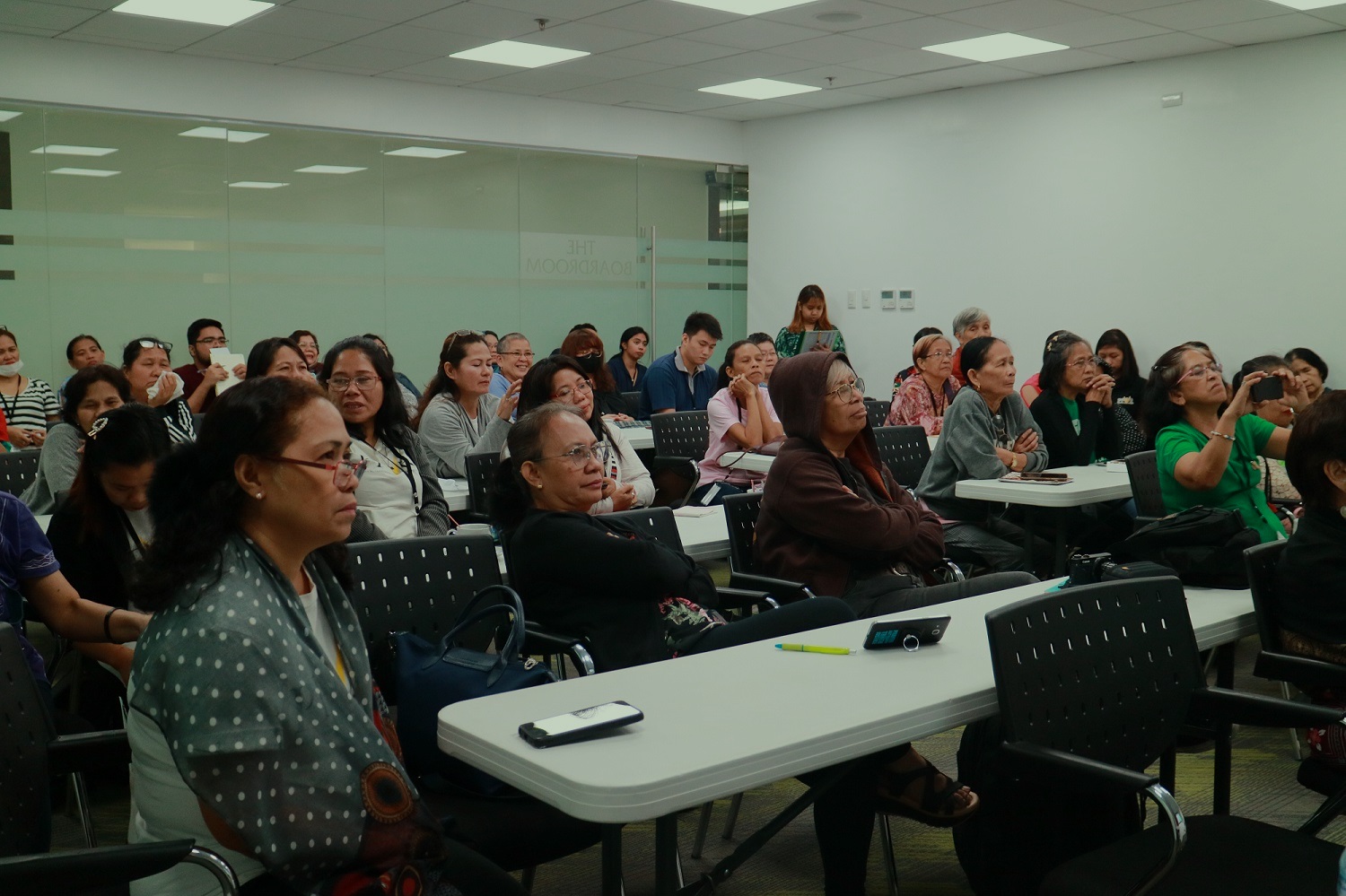 What is a family?

In urban poor communities, the concept of what a “family” is has evolved and has become complex over time.

The family is considered as the basic unit of society. Internationally, it has been recognized that families assume diverse forms and functions from one country to another, and within each national society. The 1995 Beijing Platform for Action acknowledges that, “in different cultural, political and social systems, various forms of family exist.”

However, local definitions still associate the term with the concept of marriage. The Philippine Statistics Authority defines family as “a group of persons usually living together and composed of the head and other persons related to the head by blood, marriage or adoption.”

Meanwhile, the Family Code of the Philippines defines marriage as “a special contract of permanent union between a man and a woman.” It asserts that marriage “is the foundation of the family and an inviolable social institution.”

“What do you conclude from here?” asked Dr. Mary Racelis, a social anthropologist and former director of the Institute of Philippine Culture (IPC) at the Ateneo de Manila University (ADMU).

“[It means that] the Philippines is still very strong with marriage but internationally, [the concept of family] has already evolved because the reality is many do not marry.” 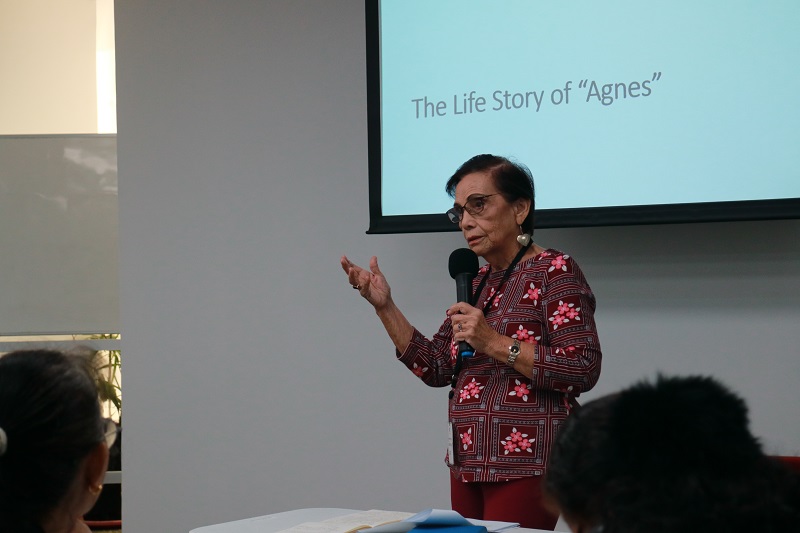 Dr. Mary Racelis of the Institute of Philippine Culture shares the story of “Agnes,” one of the women that they interviewed for their study in 2015.

In 2015, IPC surveyed 220 female respondents aged 18 to 49 years old in “Sitio Kislap,” a fictitious name that they gave to an urban poor community in Quezon City. The respondents were asked about 1) their civil status and type of spousal relationship; 2) their approval or disapproval of family forms not based on the marriage of a man and a woman, and of divorce for estranged couples; 3) their greatest sources of happiness and unhappiness; 4) their aspirations for their family and children; and 5) the types of assistance that their family has received, if any.

The study found that while 122 or more than half of the study’s respondents were married, majority of those who are not are living in with a partner. 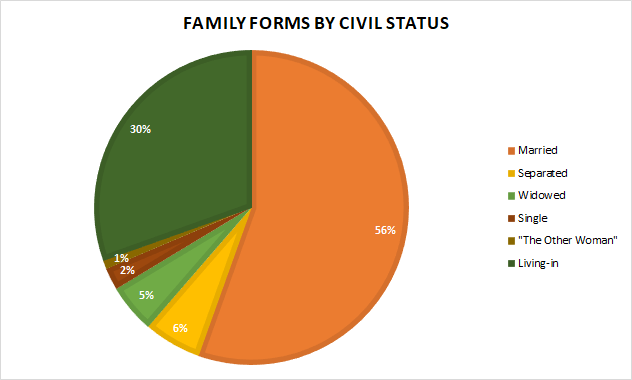 Of the 220 female respondents, 122 said they are married while 67 are living together with their partner.

Of the 67 respondents who said they are living in, 58 are never married while 9 were separated from their spouse.

“We have to change our idea that a couple must be married to be considered a family,” Racelis said. “[In our study], 30 percent of the couples are living in and consider themselves family.”

However, when asked about their opinion on couples living together without intending to get married, majority of the respondents disagreed with the idea. 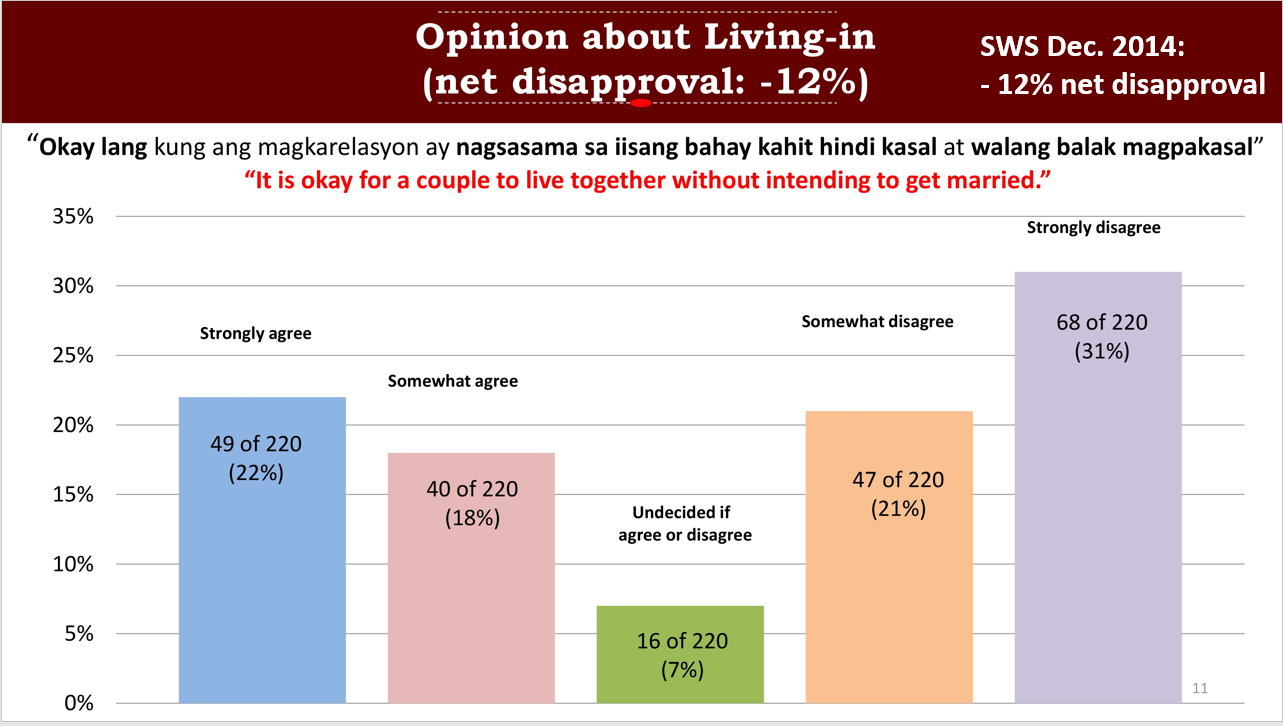 More than half of the respondents expressed disagreement with the idea of cohabitation./ Bar graph from the speakers’ presentation.

“Even though 30 percent of our respondents are living in, if you ask them, they still do not think that it is okay,” Guevara explained.

“Parang may balak pang maghanap ng iba (It seems as if they still intend to look for someone else),” a participant in the FGD with male youth argued. “Bawal sa Diyos, bawal sa batas. Kawawa ang mga bata, walang benepisyo ‘pag illegitimate (It is against the will of God and the law. Their children will not be entitled to benefits because they are considered illegitimate)”, said another from the elderly group.

On the other hand, a female adult who favored the living in setup argued: “Kung nagkakaintindihan, hindi importante ang kasal. Kung nagsama kayo sa isang bahay, doon niyo makikilala ‘yung ugali ng isa’t isa. Eh kung nagpakasal kayo, nagsama kayo, malalaman niyo, maghihiwalay. So sayang ‘yung kasal (If you have a common understanding, then marriage is not important. When you live together, you will get acquainted with each other’s behavior. What if you got married, lived in one house, discovered each other’s habits, then decided to call it off. Then you wasted your marriage).”

Still, Racelis stressed the need for the state to recognize live-in partners and lamented the absence of government support for the children of these couples.

An overwhelming number of respondents also agreed that one parent can bring up a child as well as two parents. 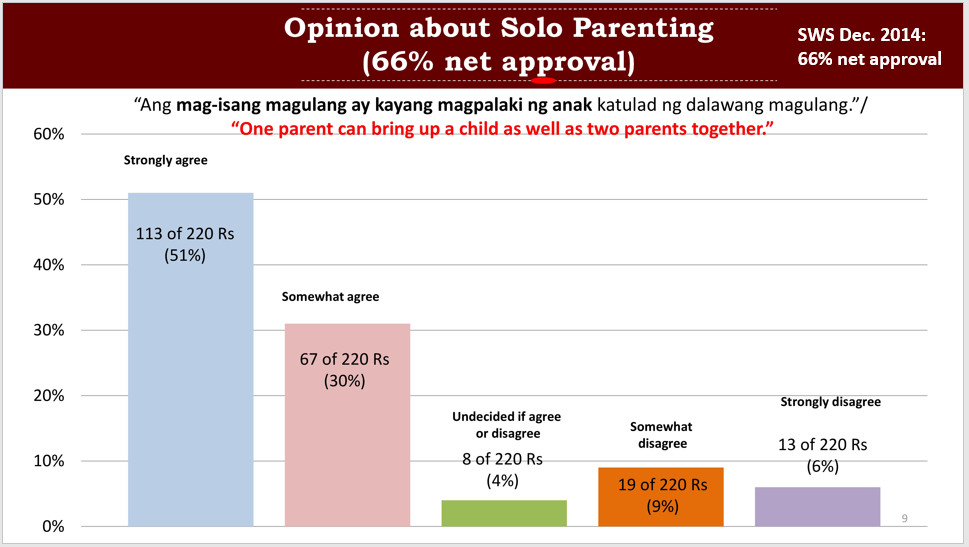 Roughly one out of three respondents agree that a single parent can raise a child well./ Bar graph from the speakers’ presentation.

On the contrary, those who disagreed stressed that this will be difficult especially if the parent’s earnings is not enough.

There are poor women, Racelis shared, who are left with four or five kids to feed and who opt to look for another man to share the responsibility of raising them and help raise the income.

“For some of them, that’s the strategy: they look for another man who wants to join them,” she said. “Then the important thing, especially for the woman, is to have a child with him to hold on to him and make him stay.”

Others had to give up their children to their relatives so that their children may live decent lives. “It’s a terrible decision that the mother had to make. Sometimes, there are very hard feelings especially for the children who were given away,” Racelis explained.

“But this is, in her view, for the best interest of her children—that they be taken cared of, fed and sent to school.”

Meanwhile, when it comes to same-sex parenting, many respondents believed that a same-sex female couple can bring up a child as well as a male-female couple. 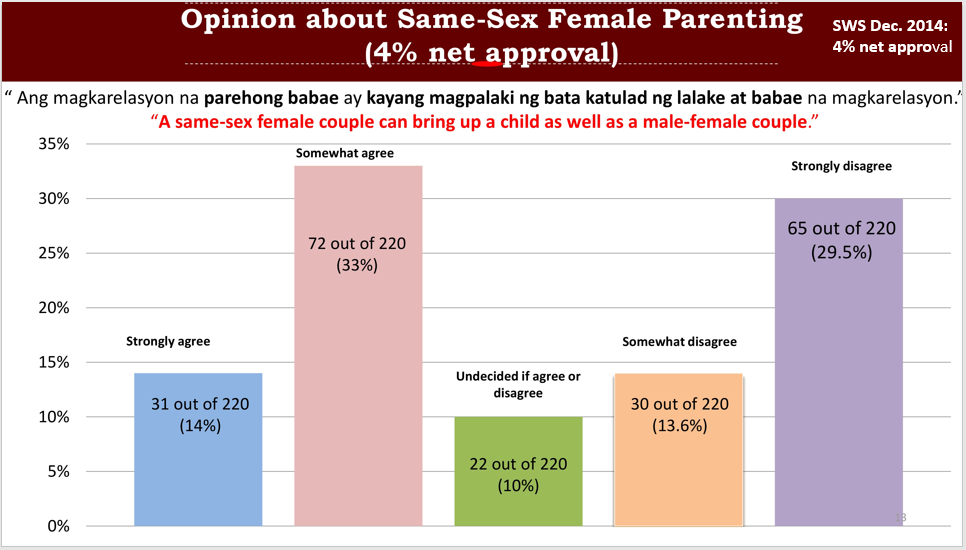 The respondents are divided on the idea of a same-sex female couple raising a child./ Bar graph from the speakers’ presentation.

“[Kapag babae], pareho silang may alam sa pag-aalaga ng bata (Both women will know how to take care of the kid),” said the male adults during the FGD.

On the other hand, majority of the participants disagreed that same-sex male couples can do the same. 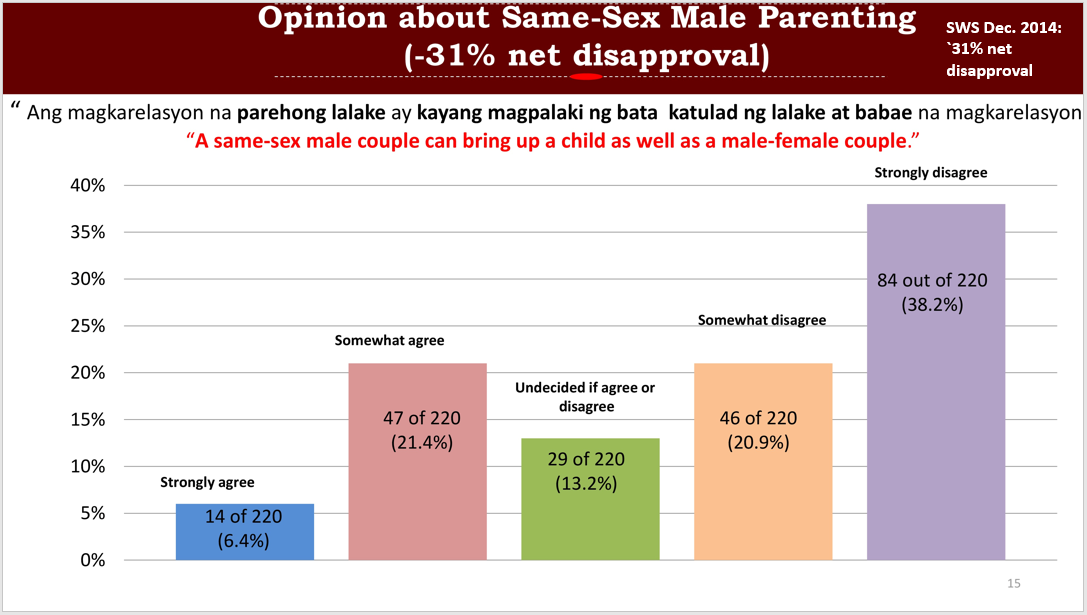 Majority of the respondents do not believe in the statement, “A same-sex male couple can bring up a child as well as a male-female couple.”/ Bar graph from the speakers’ presentation.

“Hindi nila alam ang gagawin. Ang babae, nakatutok sa bahay tapos ang lalaki, nagtatrabaho (The male couple will not know what to do. Women should be the ones focusing on the household while men are working),” the male adults asserted.

Such view, according to Guevara, only illustrates the prevailing stereotypes and gender roles attached to women.

Mina Tenorio of Likhaan Women’s Center highlighted the influence of patriarchy in the society’s definition of family. “‘Yung isa, kailangang may basbas, legal man ‘yan o sa simbahan. Pangalawa, ‘yung komposisyon niya, kailangang may tatay, nanay, anak. Kung wala ‘yung tatay at wala ‘yung anak, hindi siya pamilya (First, it needs to be approved either by the state or the Church. Second, it should be composed of a father, mother, and child. If there is no father or child, then it’s not considered a family),” Tenorio explained.

She pointed out that this definition is too traditional when, in reality, a family is not solely defined by a piece of paper signed by the two parties involved. “Maganda kung may kontrata pero kailangang ang pamilya ay isang institusyon sa ating lipunan na kung saan mas pinapahalagahan at mas pinapahusay ang kagalingan ng tao, no matter kung sino ang komposisyon niyan (It’s good if there is a contract. But family, as a social institution, should be able to give importance and hone an individual to be a better person, no matter its composition),” Tenorio stressed.

Home away from home

Guevara also offered another perspective and mentioned that family members don’t have to live under the same roof to be considered a family.

“Ang dami-dami nating (We have a lot of) overseas Filipino workers (OFWs). Hiwalay ‘yung mga magulang sa anak pero pamilya pa rin sila kahit hindi sila magkakasama (The parents don’t live with their children physically but, despite of this, they still consider each other as family),” she explained. Dr. Marichi Castro Guevara, a sociologist and professor at the Ateneo De Manila University, discusses the framework and research questions of their study.

“Ang mahalaga po kasi sa pagiging pamilya, sa aming pag-aaral, ay ‘yung nagmamahalan kayo, nagtutulungan kayo, may malasakit kayo sa isa’t isa, at hinahanapan niyo ng paraan na maging konektado sa isa’t isa kahit hindi kayo magkasama sa iisang tahanan (What’s important in being a family, according to our study, is that you have love and compassion, you help each other out, and you find ways to connect even if you’re not within the same household),” Guevara said.

The survey also touched on the issue of divorce and majority of the respondents strongly agreed that divorce should be an option to couples who have separated already and have not been living together for some time. 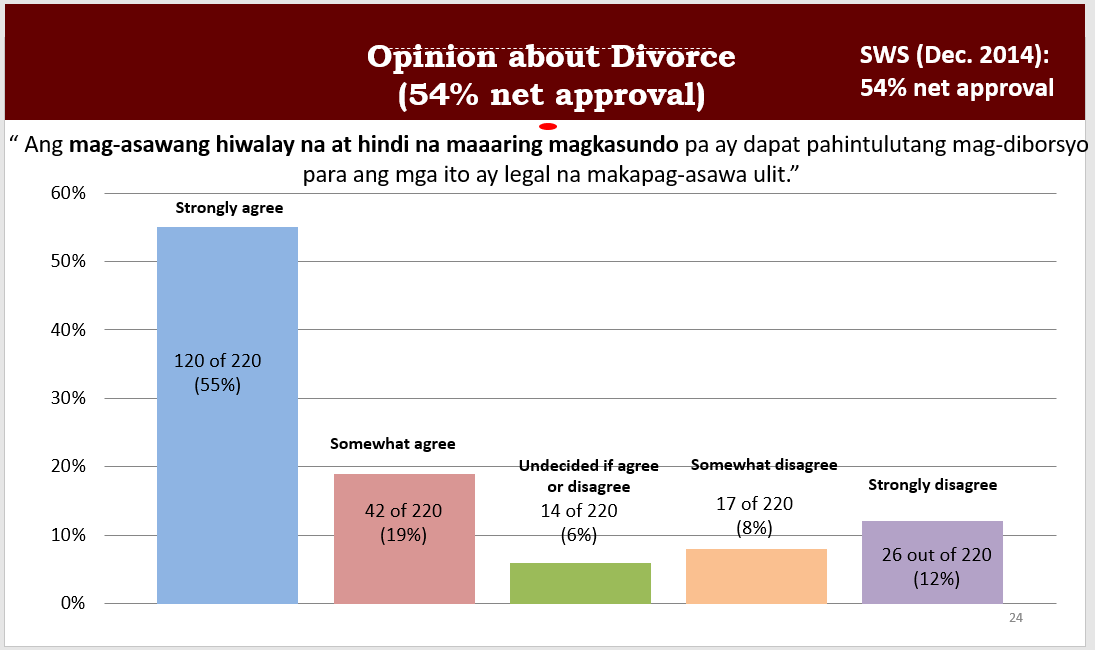 The respondents agree that couples should have divorce as an option./ Bar graph from the speakers’ presentation.

“Kung ganun na lagi na lang nag-aaway ‘yung parents, hindi rin maganda ‘yung magiging impact ‘nun sa bata (If the parents are always fighting, it will also have a negative impact on their child)”, a participant in the FGD with the female youth said.

“There is a very strong support for divorce even from those who are living in,” Racelis observed. “Their principle is that you should have the right to separate if your relationship with your partner is not working out because it’s better in the end for the children,” she added.

“If there is a divorce bill right now, I have a feeling that people [in urban poor communities] will support it,” Guevara said.

In terms of their source of happiness, many of the respondents still point to their children and their success. It is also their main aspiration for their family.

On the other hand, insufficient or lack of income is the respondents’ primary source of unhappiness. They also acknowledged that they have received some form of assistance from the government, the church or from private institutions, especially during relief operations, medical missions, and distribution of school supplies.

“They get support from different areas but it’s not a lot. Most of the time, they still have to rely on themselves,” Racelis explained.

“Thus, government planners should recognize the different kinds of families. That’s the reality,” she noted.

In her closing remarks, INCITEGov chair Teresita Quintos Deles highlighted the need to further understand the different forms of families and determine if current social structures are adequately responding to their needs.

“The family is where one feels at home,” Deles said. “No matter the kind, no matter who is working or is in-charge of taking care of the children. A unit where you are at home should not require the approval of society.” #