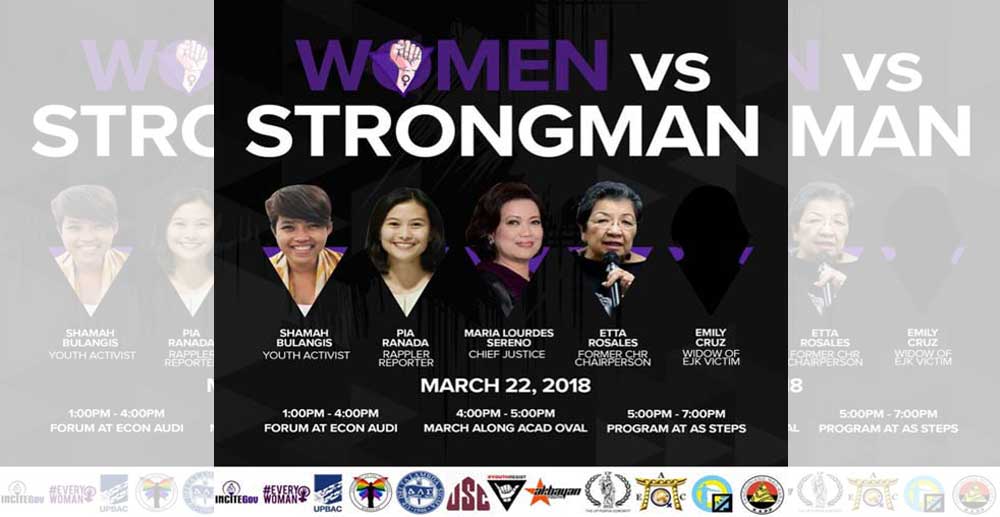 March 22, Quezon City - “Women should lead the call to reason in an increasingly chaotic, noisy and confused world,” said Chief Justice Maria Lourdes Sereno in a forum on “Women vs. Strongmen: Filipinas Resisting” held on March 22 at the Uuniversity of the Philippines (UP) School of Economics Auditorium.

The forum was attended by close to 170 UP students and representatives from the academe, women’s groups, media,  and civil society.

She observed that fake news, alternative facts, vulgar language, slut-shaming of women, and the normalization of misogyny are employed by this administration to divert the public’s attention from the real issues.

Ms. Loreta Ann Rosales, former Chair of the Commission on Human Rights and member of the INCITEGov,  that President Duterte is allergic to human rights in much the same way he is allergic to strong women.”

She called on the students and members of the civil society and the NGOs to never stop community organizing at the grassroots level as the foundation and basis for democracy to flourish especially in these trying times.

Shamah Bulangis, Convenor of #YouthResist, presented the various actions and roles that women can take in resistance to the Duterte Administration’s war on drugs, misogyny, and authoritarian moves.

“We need to push for alternatives to the drug war, to martial law.  We need to be at the frontline of opposition and resistance because we, women, are the most affected. We really need to give back to them. Iskolar ng Bayan, Iskolar para sa Bayan,” she said.

Pia Ranada, Rappler reporter banned from entering the gates of Malacañang, expressed that we should never take for granted the basic rights and freedoms that Filipinos enjoy under the Constitution, such as press freedom and freedom of expression.

“We should never ever stop demanding that our rights must be respected,” she said.

Ms. Emily Cruz whose sister-in-law died from tokhang wished for an end to extra-judicial killing in the country. She had to take care of her sister’s eight orphaned children. Her brother who is listed in the drug watch list sleeps on the roof every night for safety. She hopes that the police enforcers will abide by the rule of law and stop treating suspected drug users as if they are animals.

The forum was organized by the University of the Philippines, University Student Council (USC) in partnership with #YouthResist and various organization with support from INCITEGov. This activity is in observance of the annual National Women’s Month highlighting the struggle of women for their rights, welfare, and empowerment amid a strongly misogynistic political culture, led and fueled by no less than the President of the country.