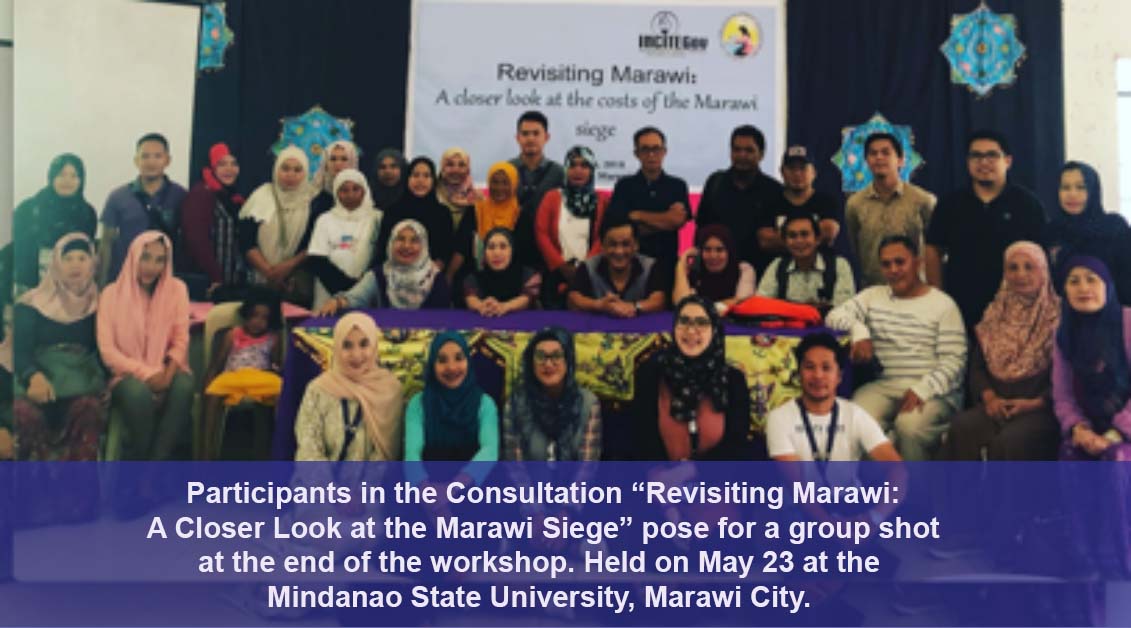 Loss Beyond Just Numbers: What Really Happened in Marawi

May 23, Marawi City -- “This has been, for us, the most meaningful and the most needed conversation on the reconstruction of Marawi,” said Drieza Lininding of the Bangsamoro National Movement for Peace and Development, Inc. Drieza has lived in Marawi for 32 and was among the 600,000 residents displaced by the war between government forces and the Islamic State-inspired Maute extremist group a year ago.

The sentiment is shared by the thirty-five (35) participants in the consultation on “Revisiting Marawi: A Closer Look at the Marawi Siege” held on May 23 at the Mindanao State University- Institute for Peace and Development in Mindanao.

They stressed that the full extent of losses – both physical and intangible – still escapes comprehensive ascertainment a year after the siege.

The rehabilitation plan released by Task Force Bangon Marawi has been met with criticism due to the lack of consultation with the primary stakeholders – the siege survivors themselves.

It will be important to first get a clearer picture of the scale and the nature of losses sustained by the city during the siege and its aftermath.

INCITEGov in partnership with Al-Mujadila Development Foundation, Inc. or AMDF thus convened this consultation with Marawi siege survivors for a full assessment of the damage from the residents’ own perspectives. AMDF is a Marawi-based non-governmental organization composed of Muslim women is at the frontlines of giving life-saving aid to civilians affected by conflict in the city.

The consultation aimed to document and consolidate the acceptable reconstruction goals as sparsely communicated by the people of Marawi. It tackled five issues that were often left out in public discourse on the siege -- land, human rights, displacement, property, and the city’s heritage as a religious, cultural, and educational center.

The consultation sought inputs from the following Marawi leaders: Dr. Moctar Matuan on the topic The Meranao Territory and Concept of Land Possession and What Others Do Not Know About Marawi; Atty. Raifah Hassan on the Damages and Looting of Property; Ms. Zahra Mapandi on Costs of Displacement and Discrimination; and Ms. Samira Gutoc on Human Rights, Collateral Damage in Marawi.

A video presentation detailing the circumstances that led to the Marawi siege was also shown to the participants. It countered the prevalent narrative which blamed the Marawi residents for what happened to their city.

Results of the consultation will be presented in Manila before a bigger audience on June 25.