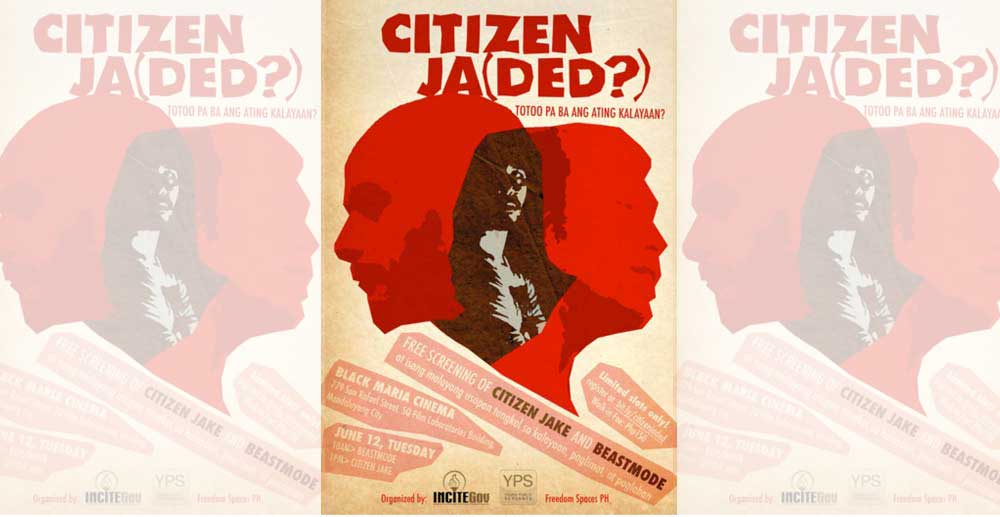 Citizen Jake and Beastmode Films, Reflections on the Current Situation of Politics

July 24, Mandaluyong City - ‘Discussions enable audience to express and share their thoughts, opinions, emotions and interpretations’, an emphasis of Prof. Atienza from the Liga Panitikan, Pananaliksik at Kulturang Popular of the Ateneo de Manila University (ADMU) as he facilitated the forum of the Citizen Ja(Ded?) on June 12 at the Black Maria Cinema in Mandaluyong City.

Citizen Ja (Ded?) screened the film, “Citizen Jake” and “Beastmode” where the audience gave their comments and clarifications during the open forum, discussing the parallelism of the films with the current political situation in the country.

“Beastmode”, directed by Eshei Mesina and written by Mixkaela Villalon, is about a social media experiment involving the dispute of two controversial Filipino actors namely Baron Geisler and Kiko Matos. It portrayed the manipulation of truth, legitimization of violence, and how violence served as a form of entertainment.

One member of the audience commented on the violence occurring in Beastmode, “I got tired after watching it, maybe because the whole duration of the movie only showed different kinds of violence... However, I noticed that issues portrayed in the film are a daily existence in our society…”

In response, Prof. Atienza explained that the violence portrayed in the film depicts the violence Filipinos experience every day especially in the current war on drugs of the Duterte administration. In order to achieve peace, violence becomes its solution.

Violence nowadays is being accepted as a form of entertainment. Eshei Mesina further added that it is high time for the people to become aware and address the issue of violence, whether it may be physical or invisible to the eyes, or sometimes even hiding the real truth.

“Citizen Jake” tells the story of Jake Herrera, a young journalist struggling to contradict his own social class and his father Jacob, a Senator who supports Marcos administration. It refers to the play of power and social class in politics.

The discussions highlight the importance of people on being able to express opinion and making a stand on certain issues.