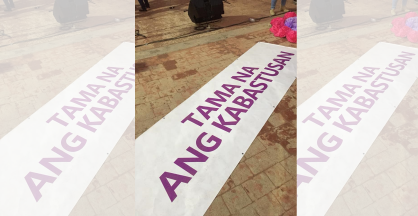 Thousands of women call to end misogyny in PH

March 8, 2019, Manila – “Tama Na! Sulong Kababaihan!” resounded across Luneta Park at 5 p.m., March 8, as over 2,000 women gathered and chanted around the statue of La Madre Filipina to rally against the persisting misogyny in the country.

Representing over a dozen women’s organizations and networks, they came together to call out President Rodrigo Duterte and members of his administration for hate speech and chauvinistic acts against women.

The various women's groups held their respective programs in celebration of the International Women's Day at different points in Metro Manila, then converged in front of the La Madre Filipina statue at Rizal Park.

They came together to demonstrate unity against the misogyny of the current administration and express their commitment to stand arm-in-arm to defend the gains made for women’s human rights by previous generations.

Women of all ages, from the boomers to millennials, stood side-by-side with well-known woman leaders like Tatti Licuanan, Ging Deles and Sr. Mary John Mananzan, initiators of the event aimed to unify the women’s movement.

Licuanan, looking at the statue, said, "We chose La Madre Filipina because just as it has symbolized the suffering of Filipinos under Japanese occupation during World War II, so it can also symbolize all the women who now suffer from different forms of persecution and abuse. Just as La Madre stood over her children, so all women must stand against misogyny and fight for their children's future."

“I am elated. It was a hard road getting here but today we made history. I hope the government is paying attention. We demand an end to misogyny. And we hope all women are listening. It's all right to resist. It is the right thing to defend ourselves, to assert women's rights and dignity. Hand-in-hand, we are pushing back. We reclaim our space, our voice, our capacity and power. This is just the beginning!" Deles said.

Sr. Mary John on the other hand explained, “I believe that our action can give courage to children and women who are at this moment being abused but are silent because of fear and shame. Let us unite and have courage! I believe that just as fear is contagious, so is courage.”