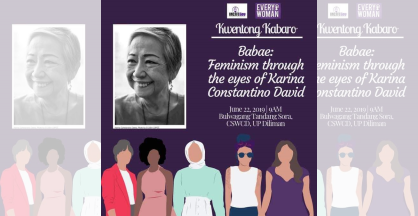 It is a testament to Karina Constantino David’s organizing savvy and political heft that a cross section of “ka-womenan” packed a seminar room at the University of the Philippines College of Social Work and Community Development (UP-CSWCD) on June 22, 2019, to mark the 40th day of her passing. The occasion was the 4th session of Kuwentong Kabaro co-sponsored by EveryWoman and INCITEGov (International Center for Innovation, Transformation and Excellence in Governance) on the topic “Feminism Through the Eyes of Karina Constantino David,” made possible through a video interview with KCD.

Numbering 60+ altogether, we were lolas in our 70s and 60s, marrieds or doubles in their 50s and 40s, and singles in their 30s (and perhaps 20s), a merry mix with varied backgrounds (academe, urban poor, workers, NGOs including an election watchdog, homegrown feminists, et al) reflecting Karina’s wondrous reach but also affirming the Paulo Freire imperative of wedding theory to action.

Praxis, in fact, was the leitmotif of Karina’s life. No idle thought, no idle word, no idle action, but one rooted in the other, always. The songs she wrote (or translated such as Pablo Jara’s “Cuando Voy Al Trabajo”) were not sheer whimsy but an odd melding of romance and grit, and yes, a call to arms to women long deadened and defeated by poverty and patriarchy.

Karina must have marveled at the female throng at UP-CSCWD: now boisterous, now quiet, some tearing, others still. The collective body language in the emotion-soaked room was akin to a bottled genie saying, first I must mourn, let me bide my time.

UP-CSWCD dean Sylvia (Guy) Estrada Claudio in her inimitable effervescent manner welcomed the women to this homecoming of sorts, women who had touched base with KCD in one way or the other, claiming her, infused by her words and her spirit for this one day of mutual blessings where each took as much as she gave.

In the opening video, Karina acknowledged her belated feminist awakening. Her first “Aha” moment was sparked by the visit of two Ateneo college students seeking an interview with spouse sociologist Randy David on newly-formed BISIG, particularly its ‘socialist vision.’ Karina offered to answer their questions because Randy would be away for an hour and, besides, she wrote the final draft of the ‘vision’ after lengthy group discussions and debate. But the two schoolboys issued a curt “No, thanks.” The look in their eyes said, “It’s only you.” Uncannily, this was a reprise of her mother’s experience. Letizia Roxas did half of eminent historian (and Karina’s father) Renato Constantino’s writings but did not get full or equal credit, and was mostly consigned to the “background,” Karina wryly noted.

Life’s ironies and contradictions were not lost on the young Karina (e.g., belonging to a progressive household but with some traditional gender roles). But it was not until her gender awakening, in congruence with a growing women’s movement, that things began to make better sense.

Karina’s contributions to feminist pedagogy are pivotal including the adaptation of feminist poker from Latin America for Philippine gender sensitivity training (“Feministang Pusoy”) and the diagrammatic expression of “Manifestations of Gender Bias”: a circle with five equal parts labeled double burden, violence against women, sex-role stereotyping, subordination, marginalization and, in the center, personhood (low self-esteem). The circle sits atop a cross, seeming to say that gender and its oppressions are a cross many women bear daily. HASIK is credited with producing the first gender sensitivity training manual in the 80s, and also in pioneering gender sensitivity training for men. Karina called herself an “organic feminist.’

Karina was a class act, manifest in the accounts and vignettes that poured out of the handful of speakers who often exceeded their 10-minute limit. Kara, the Davids’ oldest daughter, spoke of Karina’s intelligent heart and boundless generosity. When Kara sought her advice on how to spend TV reality show winnings amounting to a million pesos, Karina counseled: “If you want something to last, share it with, give it to, others.” Kara started a school in Bicol, a feeding program and an education foundation for poor children. That was over ten years ago and the scholarships are ongoing. Among the many children beneficiaries is a girl who once dove for sea urchins at five years of age to earn money. She is now a teacher.

Three former HASIK staff members, Consuelo (Tata) Lacson (now Anonuevo), Alexandra (Jing) Pura and Mina Tenorio, shared that Karina exacted high standards in everything she did, expressed in the word rigor. Jing toted a bag loaded with paperbacks, proof, she said, of the preparatory readings she had to do (mostly Karina’s articles) for the talk in a nod to Karina’s standards. Mina said that by rigor Karina meant thinking an activity through from A to Z (if possible), “finding answers to problem areas, preparing for contingencies” and, her CO instincts kicking in, “always looking at the larger picture—what would best benefit the common tao?” The HASIK joke was, “Karina is in the details”.

Teresita (Ging) Deles of INCITEGov and Pilipina had worked closely with Karina in the past three decades in many joint projects and campaigns including the birthing and building up of EveryWoman. Ging dwelt on two sets of three Ks to sum up Karina’s character traits and methods of work. In the first instance: sharp analysis (kilatis), thinking out of the box (kalikutan ng isip), and sense of humor (kiliti) to describe her persona. In the second instance: knowing people (kilala), song (kanta), and reclaiming the power of story and narrative (kwento) to describe Karina’s methods.

Penultimately, Lot Ortiz Luis of PPVR (Pwersa ng Pamayanan Para sa Voluntarismo at Reporma) recounted how Karina charged her with building PPVR in Mandaluyong virtually from scratch, ignoring Lot’s protestations that she had just resettled in the country and hardly knew anyone in the area. Such was Karina’s style, not taking No for an answer and convincing a flabbergasted Lot that she, inexplicably, was somehow up to the task. With staff and junior colleagues, Karina’s marching orders often were (no ifs, no buts) - “Surprise me.”

Becky Demetillo Abraham helped open the celebration by leading in a stirring rendition of Babae Ka, assisted by daughter Astarte. Later a diffident Becky said she would only sing “snippets” on account of failing memory and aging vocals. But, lo and behold, Becky amazed the multitude of women by singing entire stanzas and full scores. Maybe the thought that Karina was keenly listening from on high gave Becky a growing force and power that was palpable.

In her taped interview, Karina shared a vignette from the dark days of martial law. Performing at a rally at Mendiola with a military phalanx before them, Becky and Karina were loath to face the battle-ready soldiers. But with the peremptory taunt from the crowd - ”Face the soldiers!” (Harap sa sundalo!) - Inang Laya had to start singing and strumming the guitar. Pretty soon the soldiers were tapping fingers on their shields and, soon after, faces peeped out from helmets. Few Pinoys are left untouched by Inang Laya songs, then as now.

And so the day ended with women’s thoughts full of memory and yearning, hearts not quite ablaze but beating faster, and pulses quickening, with the knowledge that sisterhood is bigger than misogyny and male blood lust, and the certainty that the bonds of song and CO and sociopolitical analysis and old-fashioned chitchat would bind together these women across generations, sectors and classes, bonds helped put in place by a grand old dame up there, now turned fairy godmother, Karina Constantino David.