The long, winding, bumpy road: Beijing on my mind

The first installment of INCITEGov’s Kwentong Kabaro series kicked off on March 28 with former Commission on Education (CHED) Chair Patricia Licuanan as its inaugural speaker.

Licuanan shared her experiences as one of the women behind the adoption of a global landmark for the women’s movement: the Beijing Declaration and Platform for Action of 1995, a document which aimed to advance women’s rights and empowerment.

The declaration is a topic that is important for women worldwide. Until today, this document sets the benchmark for women’s rights globally, laying down international standards and state commitments for members of the United Nations in terms of fully empowering women. Approaching the declaration’s 25th year, it has since broadened the discussions on women’s rights in the Philippines.

According to Licuanan, this commemoration is a great opportunity to do three major things, “first, to fast-track the implementation of the Platform; second, to focus on new and emerging issues that were not prioritized in Beijing; and third, to revive feminist fervor.”

In her opening remarks, INCITEGov Chairperson Teresita Quintos-Deles emphasized that the upcoming Beijing +25 is a good time for veterans to remember and for the youth to learn how this historic document created nearly a quarter of a century ago was an important turning point for the women’s movement. 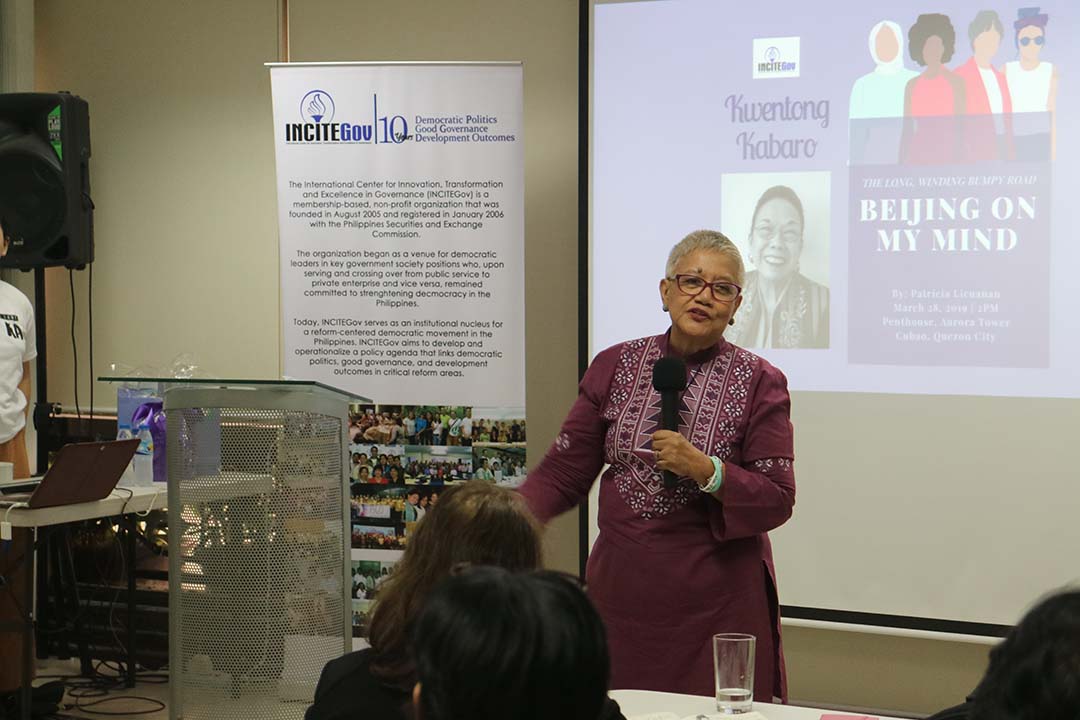 INCITEGov chairperson Teresita Quintos Deles highlighted the importance of of the Beijing Platform for Action in her opening remarks.

She also stressed that it is necessary to foster an understanding and appreciation of what women have struggled for in the past, and to emphasize that the rights women now enjoy did not come by easily.

“We cannot take them for granted. We worked hard to get them. We will have to work hard to defend them,” Deles added.

In 1995, Licuanan chaired the Main Committee of the Fourth World Conference on Women which was tasked to facilitate negotiations and arrive at a consensus. Prior to this, she also spent two years as chair of the U.N. Commission on the Status of Women (UNCSW) and the Preparatory Commission for the Conference.

The Platform for Action was adopted by the UN and 189 governments that integrated plans and policies at the national, regional and global levels.

Prior to the 1995 conference, there had already been three U.N. World Conferences on Women: in Mexico in 1975, Copenhagen in 1980 and Nairobi in 1985. At the end of the ten year period from 1975 to 1985, accomplishments were reviewed and revealed that it was easier to change the law than it was to change actual behavior and practices. The conclusion was that there was a need for more drastic measures. From here, the Fourth World Conference on Women in being was brought to conception with one objective being to further recommend specific actions to be taken. These mandates were reflected in the theme of the Conference: "Action for Equality, Development and Peace".

The  Platform for Action, Licuanan said, broke new ground and provided space to talk about women’s issues that had yet to be fully trodden.

“Even before we reached Beijing, the conference had already achieved its major objective which was to the level of awareness and discussion of gender issues globally. No other conference got the same attention from media. Even at the national and regional levels, the conference gave advocacy for women a new legitimacy,” she said.

For Licuanan, the most special feature of the Conference was its participatory spirit. The women insisted on being heard.Theemotional toll throughout was so heightened given that women’s issues affected not just women. According to Licuanan, “In past conferences, a lot of the debate was on geopolitical issues. But here, it was really women's issues. And when you discuss women's issues, that affects everybody - it affects women, it affects men, it affects families.”

This discussion was very crucial because,“It is very threatening to the status quo. Change is, after all, very threatening. Because that’s what this is - change,” she added.

One of the most significant accomplishments is the elevation of violence against women to the level of public policy. No longer is it just a domestic concern but has also been broadened to include acts justified in the name of culture and tradition.

Another important issue is the acknowledgment of women’s unremunerated work. This challenged the idea of the “working woman” and the perception toward domestic work as non-contributory to the formal economy and therefore less in value. The platform shattered this thinking and issued the call for the development of methodologies for measuring the monetary worth of domestic work and reflect it in national accounts.

One of the highlights of the conference was the debate on the universality of rights versus the consideration of cultural and religious particularities. Licuanan noted that this is a dangerous argument, as dismissing culture and tradition is deemed politically incorrect; while on the other hand, protections must be made to avoid justified violence against women. The debate resulted in a carefully crafted agreement in which there must be a balancing act, albeit difficult, of placing universality above everything else while considering culture and tradition at the same time.

Reproductive health, meanwhile, had probably the most heated debates, according to Licuanan. The subject of abortion was met with religious fundamentalists on one side and feminists from more democratic states on the other. They decided to retain the previous agreement that: “in no case should abortion be promoted as a method of family planning,” and “in circumstances where abortion is not against the law, such abortion should be safe.” Both parties were tentative to make amendments for fear of backslide for their cause that the current agreement sufficiently satisfied.

Some of the more contentious topics were about sexual rights, gender, and sexual orientation. The term “sexual rights” had been omitted entirely from the document yet still contained a passage citing that women’s rights include their right to have control over and decide freely and responsibly on matters related to their sexuality. The term “gender” also caused disputes due to the fear that it may include rights for nonheteronormative relationships, which religious states were opposed to. The term was clarified to mean “gender” how it is used in its ordinary usage as it has been repeatedly used by the UN, and was retained in the document.

Debates on sexual orientation also became among the most emotional parts of factors that act as barriers to full equality Licuanan said she had to end the discussion, emphasizing that the debate was still significant as it was the first time it was discussed in the UN. However, she had to make the difficult decision to delete references to sexual orientation in the document.

The conference took on a consultative process in which all parties had to agree to each concern. National committees and reports were created within each country, as well as regional platforms for action.

As for the negotiating process, Licuanan noted that the main objective was to arrive at a Platform for Action that was a product of consensus. “The main objective was to arrive at a consensus. This is very important because, without consensus, we don't have a document. While the document that comes out of the conference is not really legally binding as it were, it is very powerful in the sense that it can be used as an advocacy tool, supported by very strong advocates. Whatever is in the Platform or UN document can carry a lot of weight,” she said.

Licuanan during the 59th session of the Commission on the Status of Women in March 2015. UN Photo/Loey Felipe

As the keynote speaker for the Commission on the Status of Women in March 2015, Licuanan relayed the lessons she has learned celebrating Beijing +20:

First, the concerns and problems of women have changed drastically more than two decades since the Platform of Action. However, there are also problems that continue to persist. Contentious issues in Beijing such as reproductive health and rights are still contentious today. Possibly the most emotional of the debates at Beijing was that on "sexual orientation". Today, sexual orientation and gender identity remain highly controversial with little possibility of achieving consensus.

Moreover, while most countries have removed discriminatory laws and adopted laws to promote gender equality, changing the law is easier than changing attitudes and behavior as de facto equality lags far behind.

Efforts must be accompanied by strong gender equality and women’s empowerment entities. National tools on women have to be strengthened, with gender and development as focal points in organizations and agencies. Fifth, good gender-disaggregated data is a most powerful tool.  There is a need to strengthen data institutions and to build up the data capacity of national machineries.

“In the present day, to say that it is a trying time for women would be an understatement. It is truly a mark of failure once those with power and influence are allowed to use their machinery to degrade and disparage mothers, sisters, and daughters,” Licuanan said.

“This is further encouraged by those watching our leaders from their screens, simply laughing off each lewd comment and typing away at those who express dissent to not get their panties in a bunch,” she added.

“The normalization of a culture of abuse toward women should ignite outrage. The attack against women must have women themselves at the forefront of the battle. No matter how many laws and legislation are passed, if the ordinary woman on the street cannot feel safe, then what will everything have been for.”

As Licuanan pointed out, “The road to Beijing and towards consensus was long, winding and very bumpy. But more significantly, the road from Beijing to where we are today, and the way forward is equally if not even more so, because of the climate around us.”

The path forward is sure to be anything but easy. #