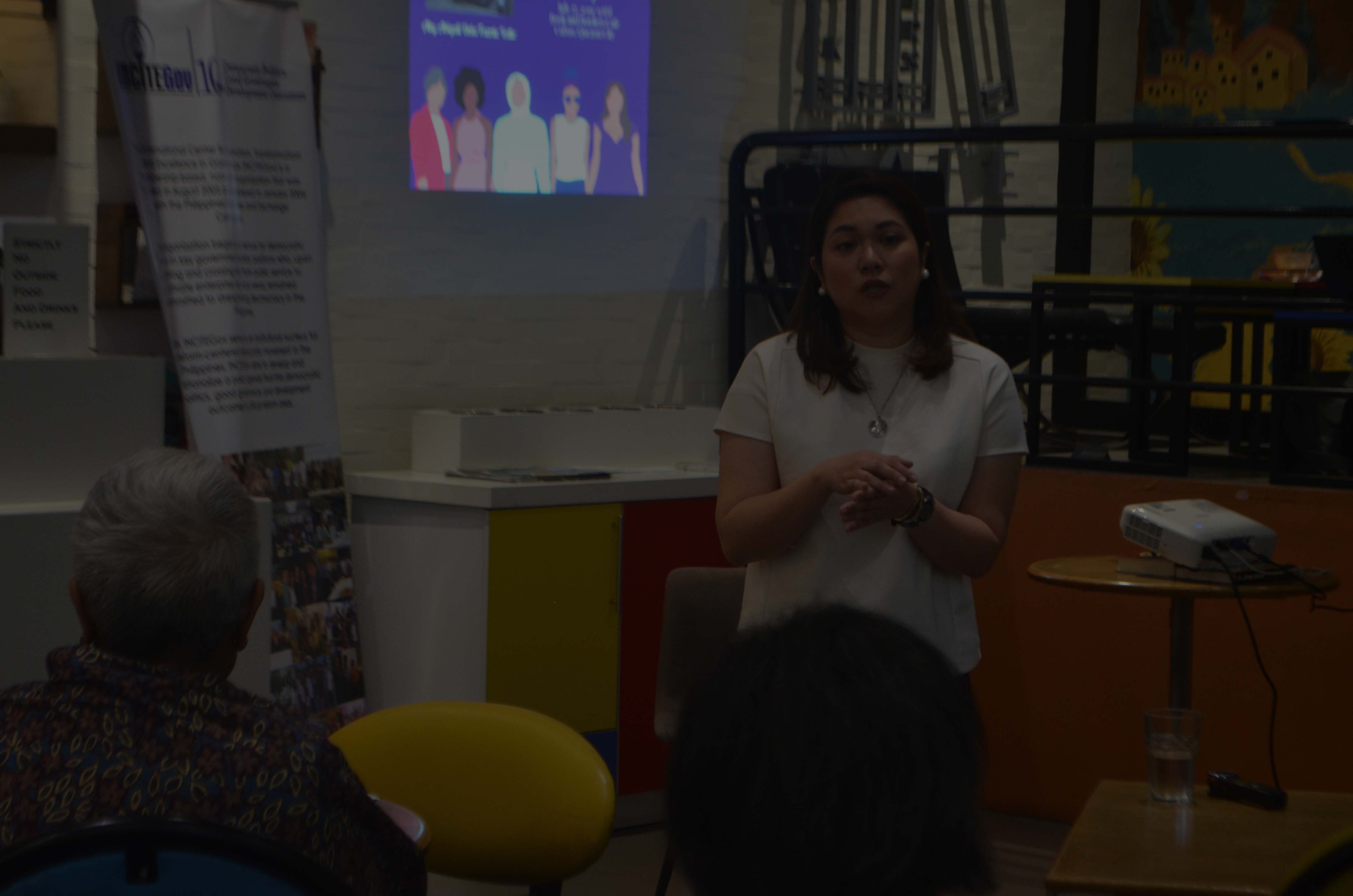 This was the word emblazoned on the marble floor of the Peace Palace that greeted the members of the Philippine Delegation as we filed in one by one through the security scanner by the front door. I stopped to take a photo, and whispered to myself: “Sana nga, sana nga.”

There was a slight chill in the air that fateful day in July 2015, the first-ever Hearing on Jurisdiction set by the Permanent Court of Arbitration for what proved to be a modern-day David versus Goliath story: Republic of the Philippines v. People’s Republic of China. Both countries were locked in conflict over China’s bid to claim what my colleague Manolo Quezon cheekily refers to as the “Sea of Many Names.”

The story began a few decades ago when China started taking over certain areas in what is universally known as the South China Sea. For the Philippines, the tension came to a head in 2012 with the standoff between the two sides in Bajo de Masinloc, 124 nautical miles (roughly 230 kilometers) from the shores of Zambales.

In 2013, the Philippine government under former President Benigno S. Aquino III made the decision to take China to court, as hundreds of diplomatic notes, numerous high-level discussions, and possibly all diplomatic interventions known to man failed to stop China’s juggernaut. Aquino put his trust in the international legal system, where all nations stood equally regardless of size, economy, or military power.

My role in the affair was simple — to be the spokesperson for the whole delegation. The PCA does not allow media coverage of the hearings, but we knew it was important for our people back at home to know exactly what was going. So it came to pass that I was the writer, producer, photographer, and spokesperson throughout the hearings, so that the members of the legal team could devote their time entirely to the task at hand.

The mood was somber in the coaster that brought us to the Peace Palace. I found out then what Harry Potter must have felt like when he saw Hogwarts Castle for the first time: in awe, but excited for the challenge to come, bearing the weight of your country’s expectations. Unlike the imaginary wizarding world of Harry Potter, there was no magic wand to wave to make this all go away. No potion to de-escalate tensions. It took hard work, conviction that your legal position is on the right side of the law, and a clear vision of what was at stake, in order to deliver a historic win for the Philippines.

As we drove up to the driveway, someone said “There are people protesting.” Nervous sighs transformed into whooping, cheering, and clapping when we realized the protesters were carrying signs that said “China OUT!” and “West PH Sea is ours! -PH” It still gives me goosebumps to this day, that singular memory of fellow Pinoys gathering together to show support for their country. We smiled and waved at them, flashed thumbs-up signs, boosted by the unexpected display of patriotism.

It goes without saying that the journey to the Hague was not filled with rainbows and unicorns. The Aquino administration was criticized by some quarters for hiring foreign lawyers and not Filipino ones. I posed this question to Supreme Court Senior Associate Justice Antonio Carpio when I happened to sit beside him on the bus one day, and he kindly explained to me that Paul Reichler, our lead counsel and the members of Foley Hoag were specialists in this kind of case -- their legal careers were built solely on arguing a specific filed – akin to surgeons who only perform open-heart surgeries day in and day out. I asked if he knew anyone back home who could come close to the specialized practice of our legal team, and he shook his head. “Not even you?” I quipped. His answer showed the depth of humility of Antonio Carpio: “Not even me.”

The naysayers also picked on the composition of the delegation, questioning why the Speaker of the House and members of the Cabinet, led by then-Executive Secretary Paquito Ochoa, Jr. had to attend. The reasoning is simple: the Philippines had to show a united front as it challenged a behemoth to defend its sovereign rights. That meant drafting the leaders of the three branches of government – the Executive, Legislature, and the Judiciary – to support the effort with their presence to send the message that the Philippines is one.

Initially we toyed with the idea of suggesting to President Aquino to attend the hearing himself. In the end, it became too complicated to figure out, with protocol and regulations, scheduling changes, security preparations, plus the fact that the Filipino people would certainly mind having their president be absent for a week. I managed to convince Executive Secretary Ochoa to go instead, being the “Little President.” He agreed, with the President’s permission, and that trip to the Netherlands was his first (and last) official trip in the course of his six years of service in Malacañang. Speaker Feliciano “Sonny” Belmonte confirmed his attendance, same with Senate President Franklin Drilon (SP Drilon unfortunately could not come at the last minute, detained by other responsibilities in the Senate.) Chief Justice Maria Lourdes Sereno declined the invitation, citing the possibility that a case might be filed with the Supreme Court to challenge the Aquino administration’s decision to go to the arbitral tribunal. In the end, Judiciary was represented by Justices Carpio and Francis Jardeleza, and Sandiganbayan Justice Sarah Jane Fernandez.

While I had studied for the hearings ahead of time, there was a lot more that I learned while observing the proceedings. It was a punishing schedule: the hearings would start promptly at 9 a.m., straight through the day with the requisite meal and two bathroom breaks. The members of the audience were not allowed to speak nor use electronics while the tribunal was in session; I relied on a notebook and pen to furiously note down everything being said so I could accurately deliver updates for the press and the public. (I still keep the two notebooks I filled to this day.) After the hearing, our legal team would meet to discuss the questions propounded by the members of the arbitral tribunal, so answers could be prepared and delivered the day after. And so it would be for the next week or so, and the first round was finished.

The Hearing on Jurisdiction was important: our performance there would determine whether we could present the actual merits of the case in a separate hearing. After the July proceedings, the arbitral tribunal would have to determine whether it has the authority to take the case. Otherwise, it could dismiss the case outright. With bated breath, we hoped that it would not be game over for the Philippines.

By the end of October 2015, knee-deep in the preparations for the hosting of the APEC Economic Leaders Week in Manila, we received the good news: the Philippines had won the first round. This meant that the legal team had to return to the Hague to face the equally challenging task of accurately presenting the merits of our position to the arbitral tribunal, with the hope that we could convince them on all sixteen of our claims relative to China’s nine-dash line. It was close to two weeks of presenting, day in and day out, each of the claims detailed by the Philippines: why China’s claim of historic rights is unfounded in international law, the militarization of disputed areas done to strengthen its grip on the disputed areas, how violated its obligation under international law to preserve the environment when it conducting dredging activities for its reclamation, and so on.

What struck me the most during these hearings was the testimony of independent expert Professor Kent E. Carpenter about the extent of the damage caused to the marine ecosystem by China’s dredging activities. Carpenter, a marine biologist, called it “catastrophic.” Much worse is that it would take a generation to repair, immediately bringing to my mind the question of intergenerational responsibility. Will our children have the chance to experience the beauty of our country when wide swathes of our seas are being destroyed before our very eyes? Will they have enough to eat in the future when as we speak, our fishermen are prevented from fishing in our own seas, shooed away as Chinese fishermen ravage our waters for giant clams, fish, and whatever else they find?

It’s unfortunate that even among us, apologists from China exist. Their job is to defend China’s aggression, touting the advantages of “the spring time of PH-China relations” because of the current dispensation’s friendship with China. But to me, no matter how they try to muddy and complicate the issue, it is quite simple: more than asserting our rights and stopping China’s aggression through the sword of the law, the arbitral case was about making sure that Filipinos continue to have what we have now. It may not be a lot compared to what more prosperous countries enjoy, but it is important that we ensure its preservation for the future generations of Filipinos.