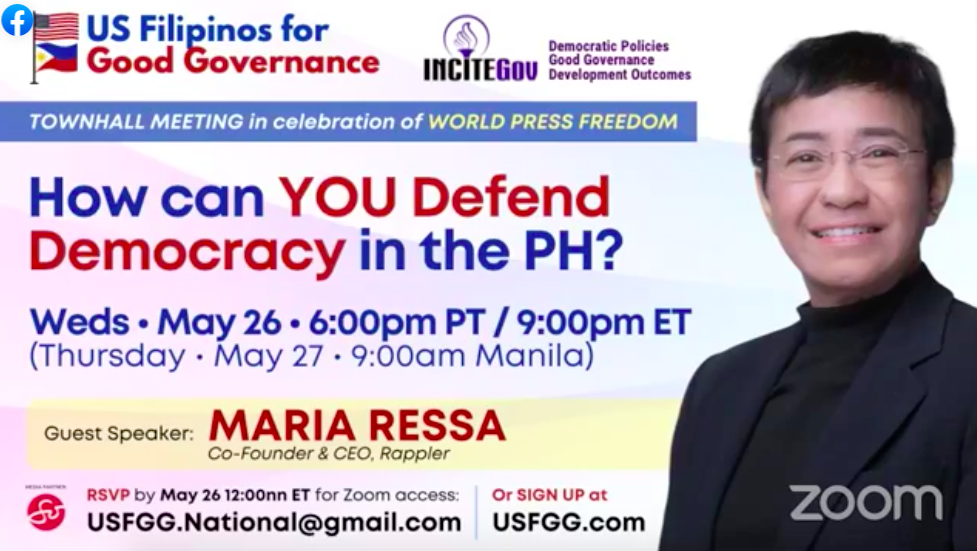 Less than a year before the 2022 presidential elections, investigative journalist and Nobel Peace Prize nominee Maria Ressa called on Filipinos — especially the youth — to keep democracy alive by exercising their right to vote.

“The youth vote is always critical. We now have an aging population. A few years ago, our median age in the Philippines was 23 years old; now it's 25 years old.,’” Ressa said May 27, during the third town hall webinar of US Filipinos for Good Governance (USFGG) and International Center for Innovation, Transformation and Excellence in Governance (INCITEGov).

Aside from voting, the Rappler founder also highlighted the role that technology, especially social media, has played in previous elections to “tear down” democracy.

“Social media has become a behavior modification system. [All of us] on social media have become Pavlov's dogs and were experimented on in real-time to disastrous consequences for our democracies,” Ressa said.

In 2018, a scandal involving British political consulting firm Cambridge Analytica and Facebook blew up after the social media platform compromised the data of millions of users for targeted political campaigns.

Ressa said the way social media works — which connects people to those who belong in the same circle — also allows the creation of “filter bubbles” which then allow groups to “create their own facts.”

“It’s the cognitive bias that creates that. And what that means — if you have no facts, no shared facts — you don't have the truth. If you can't have [the] truth, you don't have trust. And if you don't have any of these things, that tears democracy down. In fact, that tears all meaningful human endeavors down because without shared realities, we cannot solve, we cannot do anything meaningful. This is humanity. And this is the existential problem we all have right now,” she explained. 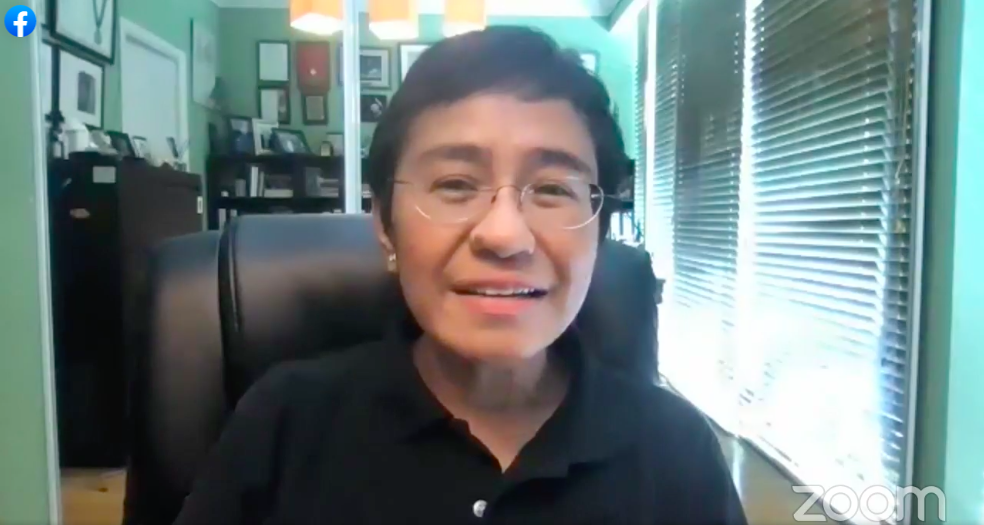 Ressa narrated how social media affected the past elections.

“This is the information operations: they take a grain of truth so that you don't know what's happening, and then they twist it. And they make real people believe it,” she said.

“There is a virus of lies that is as dangerous in the virtual world as the coronavirus in the real world. When you get infected by the virus of lies, it changes the way you look at the world. And just like if you were a drug addict, it takes years to rehabilitate,” Ressa explained.

Ressa said the prevalence of “surveillance capitalism,” where personal information is being used for profit, also makes it hard to use technology to the fullest and keeps people from thinking about solutions.

Aside from technology, Ressa also called for support for independent journalism.

“The business model of journalism is dead. Advertising is essentially dead. It's been taken over by the same tech platforms because they are offering ‘microtargeting’ — this really insidious manipulation that I refuse to touch because that kind of manipulation is unethical, immoral,” she explained.

Ressa said there are groups such as the International Fund for Public Interest Media which pool money to help independent media survive.

Lastly, Ressa also called on people to build alliances with people who share the same values.