'Political participation a must for everyone:' INCITEGov rolls out P-G-D modules to urban poor leaders

"Mahalagang mapag-usapan kung bakit importanteng lumahok sa pulitika. Makakatulong itong module para maintindihan na ang pulitika, hindi lang pang-pulitiko, at hindi lang tuwing eleksyon. Lahat tayo dapat sangkot dahil tungkol ito sa pagdedesisyon sa ating buhay. (It is necessary to discuss the importance of getting involved in politics. These modules will help people understand that politics is not just for politicians nor about the elections. All of us have to get involved as it concerns decisions that will impact our lives.) – Juliet Logan, Samahan ng Nagkakaisang Pamilya ng Pantawid (SNPP)

Makakatulong itong mga module bilang gabay sa mga usapan sa umpukan sa mga komunidad, na pag-usapan ang mga bagay tungkol sa pulitika na hindi kailangan iniiwasan o pinag-aawayan. (These modules will help guide us in our day-to-day conversations in the community – that whenever the topic turns to politics, we don’t have to avoid it and we don’t always have to debate about it.) – Evangeline Meneses, Urban Poor Associates (UPA)

These were among the comments and feedback received from the 27 leaders of Alyansa ng Samahang Pantao (ASAP) who attended the second pilot rollout of the Politics-Governance-Development (P-G-D) Modules on June 29 at Hot Off the Press Restaurant in Diliman, Quezon City.

The pilot rollout consisted of three sessions, starting with a session on “Nagmahal, Nasaktan, Nag-Move-on” which dwelt on the qualities of a good leader. The second session, “Sana Naman, Taumbayan” was about the importance of political participation. The third session, entitled “Kukumbinsihin Kita,” discussed democratic institutions and the vast powers of government. 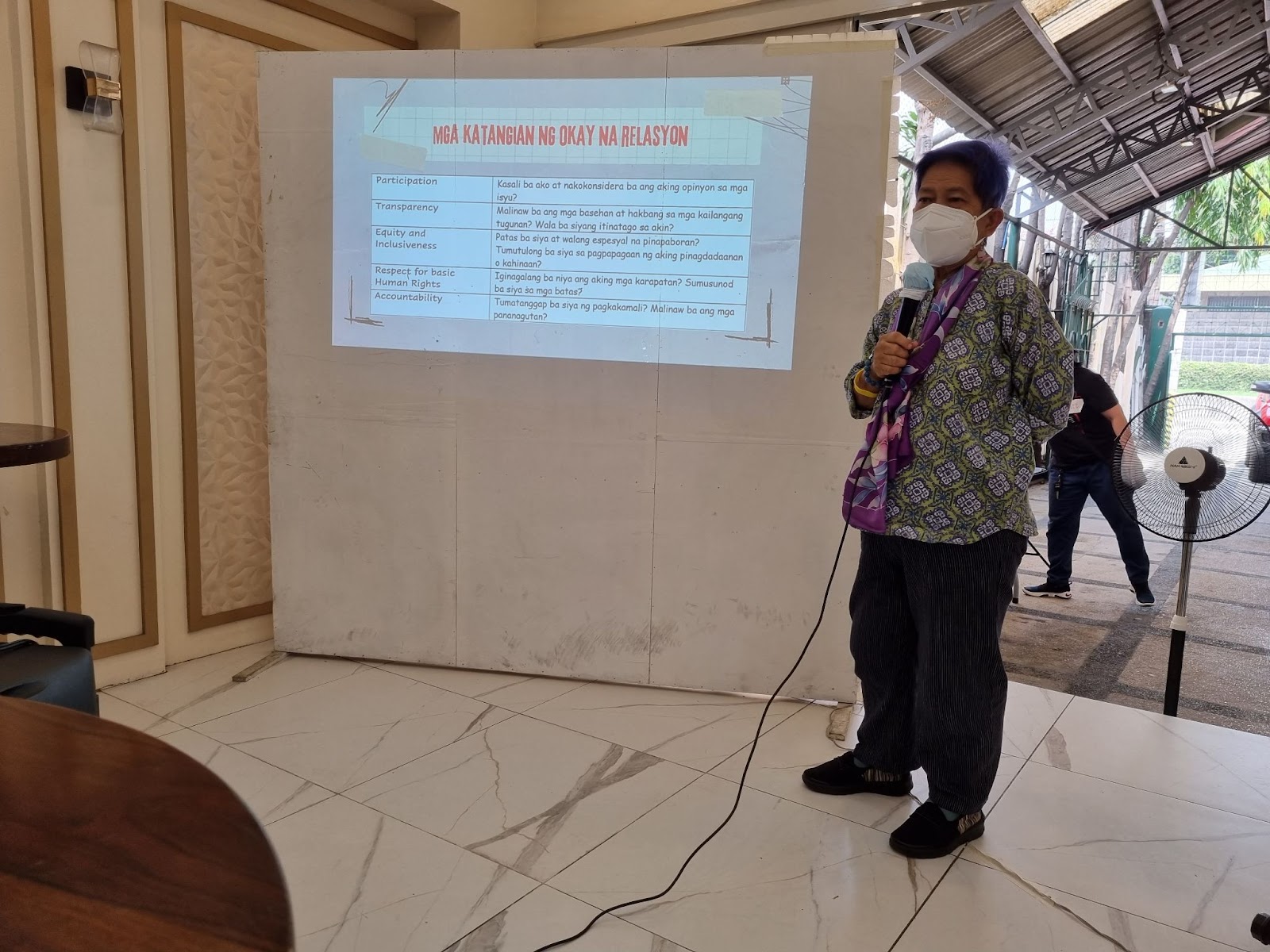 INCITEGov lead person for social protection Corazon Juliano-Soliman discusses the qualities of a good relationship — whether between two individuals, or between the people and their government.

The first session, facilitated by Ma. Nicole Pangilinan, INCITEGov Senior Program Officer, began with a structured learning exercise that elicited the participants’ insights on love and overcoming heartaches based on their experiences as wives/husbands, mothers/fathers, daughters, friends.

From these, she summarized the sources of joys and pains and proceeded to ask the participants about similar experiences that they can derive from the relationship between the Filipino people and their leaders. Power was emphasized as the basis of both relationships; relationships are energized by power. In a truly liberating and empowering relationship, there should be trust, respect, accountability, transparency, equity, and inclusivity, the participants said. These same traits characterize a democratic leader. This kind of leadership in exercising power is key to a fulfilling personal and political relationship, they added.

The session led to a lively exchange and discussion on the meaning and importance of political participation for ordinary Filipinos.

Corazon Juliano Soliman, INCITEGov founding trustee and lead for Social Protection and Community Development, handled the session on Democratic Institutions and the Vast Powers of Government. She showed the various components of governance — consisting of the laws of the land, elected leaders, democratic institutions, and, most importantly, the citizenry from whom all powers are derived.

Moreover, she also showed how development is not just dependent on the country’s elected leaders but, more so, on the people who must remain vigilant in making their leaders accountable, in ensuring transparency in governance, and in making democratic institutions work.

In all these, politics provide the basis for stabilizing and renewing people’s mandates of their leaders, and in ensuring that good governance translates into development for all people.

The sessions ended with a self-facilitated planning workshop among the ASAP leaders. They shared ideas on how they can make use of the modules in their communities — during their membership meetings, informal conversations with neighbors online and offline, and volunteer seminars accompanying their community outreach activities.